What Happens After You Receive a Federal Grand Jury Subpoena? 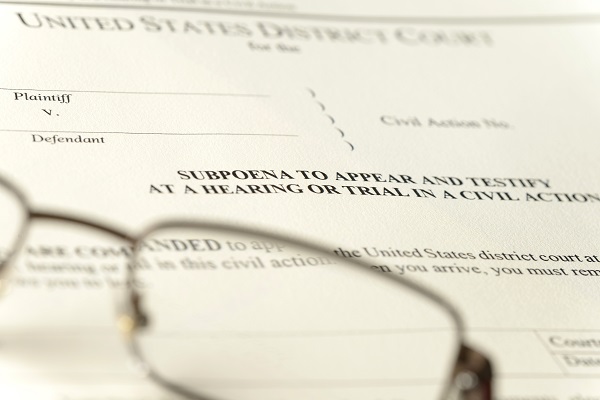 You have been served with a federal grand jury subpoena. What happens now? Whether you are being subpoenaed to testify, produce records, or both, responding to a federal grand jury subpoena requires extreme caution and careful attention to detail. Not only do you need to ensure that you have a clear understanding of the scope of the subpoena, but you also need to ensure that your response is as comprehensive as is required under federal law. As the same time, you need to be careful not to disclose any more information than is absolutely necessary, and you must assert all applicable privileges and protections in order to avoid unnecessarily providing testimony or producing records that the government can use against you.

When federal agents serve you with a federal grand jury subpoena, you should simply accept service and let the serving agent know that you need to speak with your attorney. You should not say anything else at this time. However, as soon as possible, your attorney will need to make contact with the U.S. Attorney’s Office on your behalf in order to try to gather as much information about the government’s investigation as possible. This includes the scope of the investigation, the nature of the charges being pursued, and whether anyone else has been subpoenaed to appear before the grand jury. While federal prosecutors are not obligated to share this information with your legal counsel, an experienced federal defense lawyer may be able to read between the lines and gain insights even if the U.S. Attorney’s Office refuses to answer any questions directly.

2. Negotiating the Scope of the Subpoena

More than likely, the subpoena will be extraordinarily broad, and it will seek a voluminous amount of testimony, records, or both. While one option is to file a motion to quash the subpoena (more on this below), another option is to try to negotiate the scope of the subpoena with the Assistant U.S. Attorney (AUSA) who issued it. Oftentimes, by demonstrating the significant and unnecessary burdens presented by the subpoena (without going into any substantive issues), an experienced federal defense lawyer will be able to convince the AUSA that the government can achieve its objectives without enforcing the subpoena to the full extent of its original and unduly burdensome wording.

3. Filing a Motion to Quash

If negotiating the subpoena is not an option, then it will be necessary to quickly assess the grounds for filing a motion to quash. Although federal district court judges will generally defer to the U.S. Department of Justice’s (DOJ) broad investigative authority, it is possible to successfully challenge federal grand jury subpoenas in some circumstances. However, even if a subpoena is unduly burdensome, oppressive, or indefinite, it is far more likely that the court will reduce the scope of the subpoena rather than quashing it entirely.

If you have been served with a federal grand jury subpoena duces tecum, it will be important to begin the process of assembling responsive documents immediately. Even if you are challenging the scope of the subpoena, you must initially operate under the assumption that full compliance will be required. For business entities, ensuring a compliant response will involve assembling an internal response team that will work closely with outside counsel to identify all responsive documents and appropriate legal objections to disclosure. If the U.S. Attorney’s Office agrees to limit the scope of the subpoena, or if the court grants your motion to quash, then you can limit your production efforts accordingly. But, until that time, it will be important to work diligently in order to avoid accusations of intentionally obfuscating the truth or withholding relevant information.

If you have been served with a federal grand jury subpoena ad testifacandum, your response efforts must begin immediately as well. You will need to work closely with your federal defense counsel to anticipate potential questions and formulate appropriate responses. Additionally, since you are not entitled to legal representation when testifying before the grand jury (although your attorney can wait literally right outside of the door), you and your attorney will need to establish a clear plan for how and when you will request to speak with him or her outside of the courtroom.

While assembling your document production or preparing your testimony, you will also need to work with your defense counsel to assert all relevant constitutional protections and to preserve your attorney-client privilege. The Fifth Amendment’s protection against self-incrimination allows individuals to refuse to answer any questions for which their answers would “tend” to be self-incriminating; and, when responding to a subpoena duces tecum, individuals can refuse to produce documents if the “act of production” itself would be self-incriminating.

While the Fifth Amendment’s protection against self-incrimination applies to individuals only (and does not apply to the contents of documents themselves), the attorney-client privilege is much broader and can (and should) be asserted by all federal grand jury subpoena recipients. The attorney-client privilege entitles federal grand jury subpoena recipients to withhold testimony and documents even if the information withheld is responsive and directly relevant to the government’s investigation.

7. Speaking with Other Subpoena Recipients

If the U.S. Attorney’s Office confirms that it has subpoenaed other individuals or companies in connection with its investigation, or if you learn independently that someone else has been subpoenaed, then you are within your rights to speak with these other subpoena recipients and doing so can provide valuable insight into the government’s investigation. However, there are some potential pitfalls here as well; and, rather than you speaking with any other subpoena recipients directly, any communications should be initiated and conducted through your defense team.

Under Rule 6(e)(2) of the Federal Rules of Criminal Procedure, grand jurors, court reporters, federal prosecutors, and other court personnel have a strict obligation to, “not disclose a[ny] matter occurring before the grand jury.” However, in some cases information gets out, and leaks can have severely prejudicial consequences for the targets of federal criminal investigations. If any details of your case become public, your federal defense lawyer will need to take swift action in order to protect you to the greatest extent possible.

9. Testifying Before the Grand Jury

Once you have filed any necessary challenges to the subpoena, you have completed your preparations, and any publicity issues have been contained, then it is time to testify. At this point, you should feel confident in your answers, and you should know what to do when it comes to requesting to speak with your attorney. While testifying before a federal grand jury can be an intimidating process, it is important to remember that the burden is on the prosecution to establish probable cause, and you have clear and unalienable rights under the U.S. Constitution and other federal laws.

Likewise, when the deadline to produce records in response to a federal grand jury subpoena duces tecum arrives, you should feel confident that (i) your production is compliant, and (ii) you are not disclosing anything that you are not legally-required to disclose. Your defense attorneys will work with the U.S. Attorney’s Office to submit your production in a compliant manner and address any follow-up questions or issues that may arise.

After testifying before a federal grand jury, it is important to review your testimony with your defense attorney. This can be done informally initially, and this informal review should ideally take place as soon as possible while the proceedings are fresh in your mind. If the U.S. Attorney’s Office calls on you to testify again, it will be important to try to review the transcript of your prior testimony in detail in order to ensure that you do not inadvertently make any inconsistent or contradictory statements.

12. Filing a Motion to Dismiss

Finally, if the grand jury issues a “true bill” and you get indicted, then you will need to assess all potential grounds for filing a motion to dismiss. While the burden of proof at trial (beyond a reasonable doubt) is much more stringent than the burden of proof for the grand jury (probable cause), you do not want to take your chances at trial if it is unnecessary to do so. There are a number of potential grounds for challenging a federal indictment, including:

Our federal criminal defense lawyers and former DOJ prosecutors have centuries of combined experience on both sides of federal grand jury proceedings. If you or your company’s records custodian has been served with a federal grand jury subpoena, we encourage you to call 214-469-9009 or contact us online immediately for a free and confidential consultation.

Defending Against U.S. Postal Inspection Service Investigations Under 39 U.S.C. § 3001 Addiction Clinic Owners Need to Be Aware of the Risks of Tricare Non-Compliance