What Makes a Drug Crime a Federal Offense? 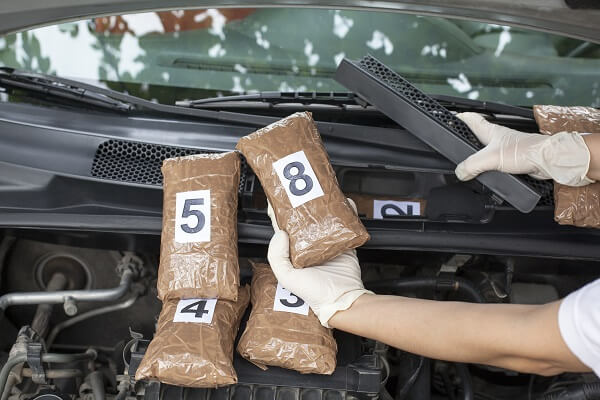 In our experience, there is not a single “right” answer. Rather, there are a number of reasons why someone may be charged with a federal drug crime rather than a state criminal offense. In this article, we will look at the types of drug crimes that are subject to federal prosecution. Then we will talk about some of the reasons why you could be facing a federal case.

At the federal level, drug charges run the gamut from simple possession of marijuana (yes, this is still a federal crime) to large-scale manufacturing and distribution of synthetic controlled substances. While state laws often severely punish drug crimes, the federal penalties for drug-related offenses tend to be even more severe. In many cases, federal drug crimes are subject to mandatory minimum penalties. Federal crimes that carry the potential for substantial fines and long-term incarceration include:

One of the most common reasons why someone may be prosecuted for a federal drug crime rather than a state-level offense is because their investigation or arrest was carried out by a federal agency such as the Federal Bureau of Investigation (FBI), Drug Enforcement Agency (DEA), or Customs and Border Protection (CBP). If you are arrested at the border or as a result of a sting operation carried out by federal agents, you will almost certainly be charged at the federal level.

The U.S. Department of Justice (DOJ) has made clear that combatting the nation’s opioid crisis is a top federal law enforcement priority. Because of this, individuals accused of crimes involving heroin, fentanyl, oxycodone, and other opioids are more likely to be prosecuted in federal court. As the DOJ receives other executive mandates and shifts its focus over time, individuals charged with crimes involving other types of drugs and activities may be at increased risk for federal prosecution as well.

All prescription drugs are listed as controlled substances on Schedules II through V, and any use of a prescription drug without a valid medical purpose is prosecutable as a federal offense. Due to the extensive regulation of prescription medications at the federal level (with oversight by the DEA, Department of Health and Human Services (DHHS), and various other agencies), crimes involving prescription drugs routinely get turned over to the DOJ.

From opioid fraud and abuse to prescription drug fraud, drug crimes involving health care practices and providers tend to be charged federally. This is because “health care fraud” is itself a serious federal offense, and fraud investigations targeting health care entities will frequently result in a number of other serious federal charges as well.

Even if an arrest results from a routine traffic stop or execution of a search warrant by state or local police, it may still lead to federal charges if the allegations are substantial. For example, a traffic stop that yields pounds of marijuana packaged for distribution might be turned over to federal authorities, while an arrest for simple possession may be prosecuted under state law. Similarly, while someone growing a few marijuana plants in their backyard might be charged with cultivation under state law, the discovery of a meth lab might trigger federal prosecution.

Any time a drug arrest involves shipment across the border or across state lines, there is a good chance that it will result in federal charges. Similarly, if an investigation produces evidence of a potential multi-state conspiracy, all individuals involved are likely to be charged with federal offenses.

Regardless of why a drug case is being prosecuted federally, avoiding substantial punishment requires a strategic and aggressive approach to defending against the government’s allegations. Federal prosecutors devote substantial time and resources to pursuing drug charges, and individuals who have been charged must act quickly in order to level the playing field. At The Criminal Defense Firm, we have extensive experience representing clients in federal drug cases nationwide and we can take action immediately to help you present the strongest possible defense.

Are You Facing Federal Drug Charges? Call or Click for a Free Case Assessment

For more information about our experience in federal drug crime cases or to learn about the defense strategies you have available, please contact us to schedule your free case assessment. To speak with federal defense attorney, Dr. Nick Oberheiden, in confidence, call us at 214-251-4238 or submit your case online today.

This information has been prepared for informational purposes only and does not constitute legal advice. This information may constitute attorney advertising in some jurisdictions. Merely reading this information does not create an attorney-client relationship. Prior results do not guarantee similar outcomes in the future. The Criminal Defense Firm is a Texas professional corporation with its headquarters in Dallas. Mr. Oberheiden limits his practice to federal law.

What Charges Can Result in the Loss of a Medical License? 7 Defense Strategies to Prevent a Health Care Fraud Investigation from Leading to Criminal Charges